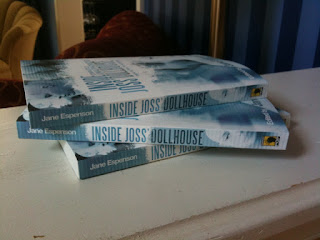 As I blogged about a few months ago, an essay I wrote about Joss Whedon’s Dollhouse is going to be included in an anthology by Smart Pop Books. And, said anthology is edited by none other than the amazing Jane Espenson. (!)

The book is available for pre-order on Amazon.com and is set to be released in early October (2010). But guess what turned up in my mail yesterday? Yep, a few advance copies from the publisher!

There are 18 essays in the anthology. I have read several of them and I’m rapidly working my way through the rest. You’ll probably say that I’m a bit biased, but I think it’s a great collection of essays for any fan of Joss/Dollhouse.

Actually, if you’re a pop culture fan and have never read a Smart Pop book, you must immediately check them out. Generally, their anthologies include essays from established writers* that delve into all sorts of wacky elements of your favorite TV shows, movies, comics and books. (*the Dollhouse anthology is an exception, being all fan submissions regardless of professional writing status)

You can even try them out by reading a free essay online every weekday. (I was hooked a few years ago when I discovered Seven Seasons of Buffy.)

I had a lot of fun writing my Dollhouse essay. Of course, by the time I found out about the contest, I was scrambling to write it in time—so that part was a hair stressful—and as soon as I submitted it I found about 80,000 things I wished I had changed. (A.k.a. the way I usually feel after submitting writing to anyone.)

Luckily, once it was selected, the editor from Smart Pop books who helped me polish it up was phenomenal. She really helped me narrow in my theme, throw out some unnecessary digressions and stop over complicating my main idea. So I’m pretty happy with the end result. (I kinda wish I divided it with sub-headings, but live and learn.)

If you pick up the book and happen to find your way to this post, I’d love to hear what you think of my essay or about the anthology in general. My essay is “Negative Space in the ‘House: How Caroline is the Vase.” It’s the one comparing personality in Dollhouse to the optical illusion of Rubin’s vase. The theory might be a bit out there, but it’s what I kept thinking throughout the series. Anyone else have a similar thought?

3 thoughts on “Inside Joss’ Dollhouse: Part 2”