Looking over my bookshelf today, I noticed a copy of Inside Joss’ Dollhouse. This collection of essays has a pretty specific audience: people who watched and loved Dollhouse, Joss Whedon’s short-lived series starring Eliza Dushku. 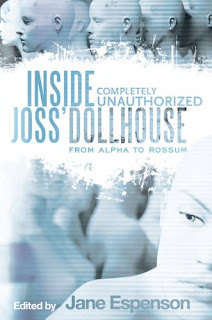 As a longtime Whedon fan, I can still remember the long wait for Dollhouse to air. That wait began when the show was announced in 2007, and was prolonged by the Writers Guild of America strike that lasted until early 2008.

There hadn’t been much released about the show, but I did know that it had something to do with memories being wiped and replaced. And the people with the new memories (Dolls) being hired out for various services.

That was around the same time I’d started putting together ideas for my book, The Insistence of Memory, and the show’s description gave me pause. It’s really not all that related, but both deal with recording memories, in a sense, so I was doubly interested in what Joss had planned.

The wait continued and I put Dollhouse out of my mind. As I became busier with freelance writing clients, and less sure of where I wanted to take the story, The Insistence of Memory was also left in the background (until I picked it up again and finished it nine years later).

When Dollhouse finally premiered in 2009, I remember being nervous about Topher’s “chair” because I had written a vaguely similar, but much more low-tech version of reclining in a chair during memory sessions in my book. But that was about the extent of the similarities.

While Dollhouse captured my heart from the first episode, the overall reviews were mixed. Some didn’t like the pacing and tone. Some were too uncomfortable with the prostitution aspect of the Dollhouse. Some worried that Eliza Dushku couldn’t carry such a complex lead role. (I thoroughly disagreed, having loved her in Tru Calling—another great show cut short.)

For me, the show explored many beautiful, messy, complicated aspects of identity, relationships, free will, and bodily autonomy. It did bring up uncomfortable subjects, and sometimes went very dark, but it explored them in objective, honest ways. Characters were gradually developed, adding layers as the show went on, and I was sad (if not entirely surprised) when it was announced that Dollhouse would end after the second season.

As the series closed, I happened across a contest from Smart Pop Books that was soliciting fan essays about the show. There wasn’t much time to enter, but I quickly pulled together some thoughts on an idea that I’d been turning over since the show began: comparing the relationship between “personality” and the physical body to the relationship between positive and negative space, as in the classic Rubin’s Vase illusion.

My idea was a bit complicated and I’m still not sure I conveyed it was well as I’d have liked, but it made the cut and was accepted as part of the compilation–which was beyond thrilling, mainly because Jane Espenson would be the book’s editor.

You may not be familiar with Jane Espenson by name, but you’ve likely seen (and loved) her work. She’s worked on a wide range of TV shows, as a writer, creator, and producer. Just a few include Whedonverse shows Buffy the Vampire Slayer, Angel, and Firefly, as well as Tru Calling, Battlestar Galactica, Caprica, Gilmore Girls, and Once Upon a Time.

Having Jane Espenson read my essay submission was exciting, having her select my essay sent me over the moon! She even sent me a congratulations tweet, which I unfortunately failed to screen capture and have since lost somewhere in the depths of Twitter’s archives. (Doh!)

If you missed Dollhouse the first time around, perhaps it’s time to give it a try. Two seasons makes it easily binge-able, and if you want more, I know where you can find a collection of deep-diving, thought-provoking essays. 😉

**Update: And then this happened…. thank you, Jane Espenson!! You are fabulous! 😁 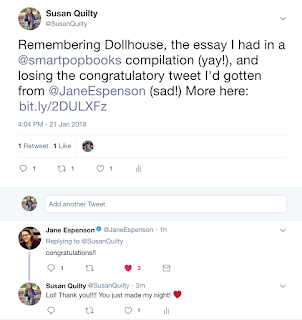