For my second novel, To the Left of Death, I decided to use my own art on the cover. That’s scary for me. In my estimation, I’m a writer, who occasionally dabbles with art, but not an artist. Fortunately, I have a lot of awesome friends who gave me the courage to go for it.

Before I get into the story behind the cover—and acknowledgments to those who helped—here’s the front cover along with the novel’s back-of-the-book summary: 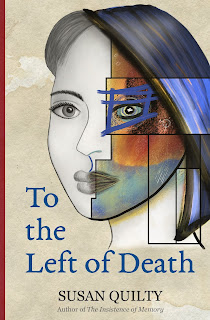 She didn’t bring the gun. She didn’t pull the trigger. But she tried to stop the blood, and she held him as he died.

When an elementary school teacher witnesses murder, she’s left with painful memories and an inability to make peace with her experience. She now goes through the motions of daily life, sitting up night after night with her never-ending thoughts and everlasting bourbon.

A return to her teenage love of drawing begins to revive her, but will her art be a salvation or a path back into the swirling mystery of that fateful day?

To the Left of Death takes a first-person look at the struggle to find connection and purpose while navigating the lingering effects of trauma.

The cover art was drawn by hand using Procreate and my Apple Pencil/iPad Pro. (Cover layout in Photoshop Elements.)

I started with the simple sketch, and then I was stuck. Without much experience in Procreate, I quickly decided the abstract concept was beyond my drawing ability.

Plan B was to stick with the simple sketch. I had support for the sketch from several artistic friends, though something was still missing. They offered suggestions for a textured background or adding a touch of color. But nothing I tried felt quite right.

Eventually, I decided to give the abstract idea another try. But I needed some help.

I reached out to my artist friend, Kevin Bednarz, who immediately told me that I needed to stop relying on the hard line ink pen and start experimenting with the other Procreate brush tools.

So I spent several days playing. Brush after brush. Layer after layer. Mixing colors and techniques just to see what would happen. I was getting lost in a different way. Too many options. No clear vision. 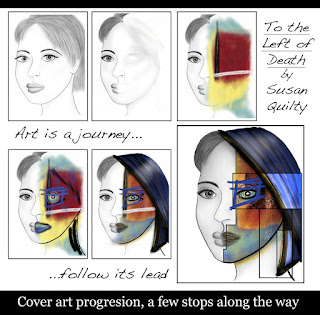 My son, Michael Cherry, helped me turn a corner. As a scenic designer, Michael is adept at distilling the themes of a story into a visual representation. As we talked, the pieces started to come together. With a few more suggestions from Kevin, I had my cover portrait.

After all that, I was ready to slap the art on a white cover, add some text, and be done with it.

Until my artist/graphic designer friends, Rodney Roberts and Deanna Escobar, generously offered to take a look.

They suggested some layout tweaks, as well as the parchment texture, which raised the cover to a whole new level!

In some ways, I still really love the original simple sketch. It has a certain vulnerability and unease that speak to me. But I also love what I see as a more polished, controlled chaos in the final portrait.

I tend to work solo, probably a lot more than I should, but I’m so glad I reached out to some of my artistic friends on this one, and so grateful for their help and encouragement. Much love to you all!

If everything goes as currently planned, To the Left of Death will be available for purchase by the end of September, 2018.