As promised, a first glimpse of my next novel: To the Left of Death

She didn’t bring the gun. She didn’t pull the trigger. But she tried to stop the blood, and she held him as he died.

When an elementary school teacher unwittingly witnesses murder, she’s left with painful memories and an inability to make peace with her experience.

Over time, her friends and family move on, leaving her to go through the motions of daily life, despite sitting up night after night with her never-ending thoughts and everlasting bourbon.

A return to her love of art begins to revive her, but will her drawing be a salvation or a path back into the swirling mystery of that fateful day? 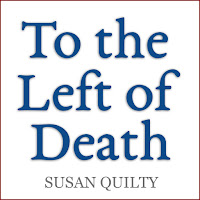 While To the Left of Death will be published after The Insistence of Memory, it’s a story that I began writing years ago. For a while, I alternated between writing both books, and I wasn’t sure which I would finish first. (My third book—to be announced later—was also in the later part of that mix.)

Unlike my previous novel, To the Left of Death is written in the first person. It was definitely a challenge to live inside this woman’s head and try to create a realistic perspective of life after trauma.

More details will follow, but if all goes as planned, the book will be released in mid-September (2018).

In the meantime, you can pick up a copy of The Insistence of Memory in both Kindle and paperback editions. And, if you’ve already read it, Amazon reviews are greatly appreciated!!

Thank you so much for your continued support!